One part of my job is to work with our Client Services team to deploy hosted software solutions for customers.  We accomplish this using Amazon Web Services (AWS) and a number of their cloud networking solutions.  The base solution we have defined looks something like this:

We have successfully deployed a number of customers using this framework, and it has worked well.  However, all customers have different requirements – and a new customer had a limitation that we had not dealt with before:

VPN connectivity is required, but no RFC1918 addresses may be used within the VPC.  All addresses must come from the Public IP space.

This is the first in a series of posts describing how I arrived at a solution; hopefully these will help if you find yourself in a similar situation.

The following options were explored but were either not feasible or were not acceptable to the customer:

So, I recommended that we create a proof-of-concept to see if we could actually route Elastic IPs over an IPsec tunnel to the VPC.  This would require finding a solution outside of the standard VPC VPN configuration, as there is a critical constraint which affects the customer requirement.

Q. Can I assign one or more Elastic IP (EIP) addresses to VPC-based Amazon EC2 instances?

Yes, however, the EIP addresses will only be reachable from the Internet (not over the VPN connection). Each EIP address must be associated with a unique private IP address on the instance. EIP addresses should only be used on instances in subnets configured to route their traffic directly to the Internet gateway. EIPs cannot be used on instances in subnets configured to use a NAT gateway or a NAT instance to access the Internet. This is applicable only for IPv4. Amazon VPCs do not support EIPs for IPv6 at this time.

The POC was to use Cisco CSR 1000 instances in AWS to perform static NAT and to replace:

(I know, the edge subnets aren’t contiguous… they were added after the VPC was configured, and I didn’t feel like rebuilding the environment and updating the diagrams for this post.  Future deployments would use a slightly different subnet assignment, but the solution still works)

Important to remember is that the route tables contain an entry for the VPC prefix as a local address; that is, each route table has a ‘Local’ route to 172.16.8.0 /21.  This understanding will be necessary when it comes time to configure high availability.

Elastic IP addresses allocated to the VPC (obfuscated; the actual EIPs are routable and not in the RFC1918 space):

NOT associated with any instance but allocated to the VPC: 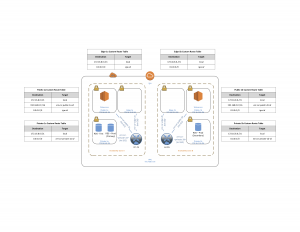 VPC Base Configuration with CSR 1000

The CSR instances (“Security Max Performance”) will be configured to support Dynamic VTI IPsec (via FlexVPN).  Our edge routers will each establish 2 tunnels – one to each CSR.  Routing will be via BGP to the Loopback address.  The customer will connect using a Fortinet device, with one tunnel to each CSR and use static routing.  A simplified diagram is below: 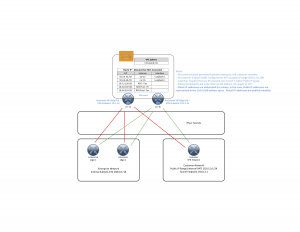 With the problem and proposed solution now defined, it’s time to start the fun part – configuration!  That will be covered in the next post.

« Revisiting QoS on the Nexus 9k, Part 4: Policy Verification (and a vSphere Discovery)
Routing AWS Elastic IPs through a VPN with the Cisco CSR 1000: Initial Configuration »